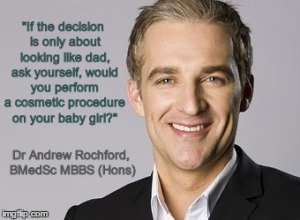 Last month, Australian doctor, TV medical commentator and former ‘The Block’ winner Dr Andrew Rochford presented a report on circumcision on Channel 7’s news ‘The Healthy Truth’ segment, which was also packaged as a story on ‘Today Tonight’ in Adelaide.

The sentiments expressed in this latest report were significantly different to those expressed in Dr Rochford’s piece on circumcision on Channel 10’s ‘The Project’ in 2010.

This earlier report was in response to the publication of a journal article which suggested that circumcision should be promoted to lower the rate of HIV transmission in Australia. Much of the TV report showed the doctor repeating the opinions expressed by others, with most statements prefaced with phrases such as ‘some people believe’ or ‘some experts claim’.

Comments on the report on the station’s website and social media sites quickly highlighted the fallacies in many of those opinions, including the following:

– A number of issues with the African clinical trials which were used to support the claims in the journal article.

– Langerhan cells do not only exist in the foreskin.

–  A non-retractile foreskin is normal at birth and remains common until after puberty.

– The questionable credibility of the the authors Alex Wodak and Brian Morris.

– The lack of any discussion on ethical considerations.

This latest Channel 7 report showed a more confident and mature Doctor Rochford, who was unafraid to express his own thoughts, which in general were more strongly against the procedure. It may be that the feedback from the earlier report has shaped his opinion since then, or he may be reflecting the more recent public sentiments on circumcision, which has shifted away from the procedure, possibly due to more recent emphasis on ethical and bodily autonomy considerations. 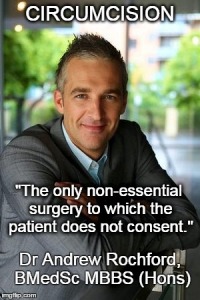 While it’s disappointing that the Australian mainstream media is yet to highlight the functions of the foreskin, we applaud and thank Dr Rochford for bringing the ethical issues to the forefront, and bringing the Australian public one step closer to the truth on circumcision.

WELCOME TO THE INTACTIVISTS OF AUSTRALASIA HOME PAGE 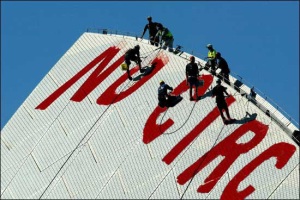